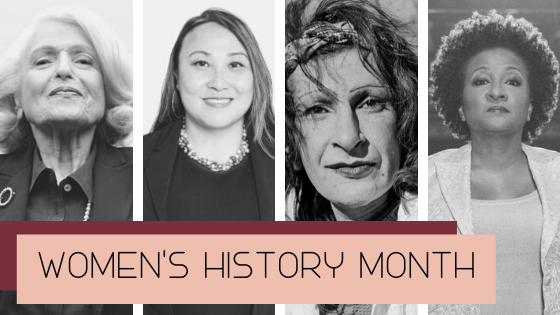 It's Women's History Month! This month aims to recognize, honor, and celebrate all the women who have contributed and bettered our society. Women are recognized for their activism, history, and ability to change the world for the better. Now more than ever, marches, protests, and days of recognition are vital to continuing that legacy for generations of women to come.

This year, Apicha CHC will be highlighting several queer women whose legacies have had a lasting impact. Queer women, especially of color, are often marginalized and experience an altered level of discrimination. However, their contributions to society should be recognized and celebrated. Read more about each woman and their achievements by clicking their names below.

Sylvia Rivera was a transgender activist and was an instrumental player during the Stonewall Riots in 1969. Born in 1951 in the Bronx, Rivera was raised by her grandmother, who disapproved of Rivera's gender identity and behavior. Rivera ran away at the age of ten, and found a community of sex workers, drag queens, and other queer folks.

Rivera was a close friend of Marsha P. Johnson and was there with her during the Stonewall Riots. After the riots, Rivera and Johnson went on to continue their advocacy for trans and gay individuals. They founded  STAR, the Street Transvestite Action Revolutionaries, that worked to provide housing and resources for trans individuals, and trans homeless youth in particular. She struggled with homelessness and drug addiction, and left the public eye until 1990. She then slowly became involved with activism again.

Rivera was known to be vocal, determined, and committed to civil and gay rights throughout her life. She passed away in 2002, but her legacy lives on. In 2020, NYC announced that a monument will be installed of Rivera by the Stonewall Inn, in 2021. The Sylvia Rivera Law Project, dedicated to her, is an an organization works to guarantee all people are free to self-determine gender identity and expression, regardless of income and race, and without facing harassment, discrimination or violence.

Wanda Sykes is a gay comedian, actress, writer, and activist. Born in 1964 in Virginia and her mother and father worked as a banker and U.S. Army Colonel. After earning her Bachelor's Degree of Science in Marketing at Hampton University. Her first job out of college was as a contract specialist for the NSA, but she felt unfulfilled. She began to do standup in 1987 in front of a live audience and continued to worked for NSA until 1992, when she moved to New York City.

Sykes' first breakthrough in comedy was securing a position as a writer for The Chris Rock Show in 1997, where she also made many appearances. The writing team won an Emmy in 1999 for Outstanding Writing for a Variety, Music, or Comedy Special. From there, she secured roles in shows like Curb Your Enthusiasm, Blackish, and starred in her own short-lived Fox network sitcom, Wanda At Large. She is a published author, has several comedy specials, and in 2009, became the host of a new late-night talk show on Saturdays on Fox for The Wanda Sykes Show.

In addition to her comedic and television career, Sykes has been an LGBTQ+ advocate and activist, especially in regards to same-sex marriage and anti-bullying campaigns. As a gay Black woman, Sykes has been incredibly successful and visible in comedy, television, and activism -- which should never go unnoticed. (Photo Source: Netflix)

Edie Windsor was an LGBTQ+ activist and advocate. Her landmark case in the Supreme Court granted same-sex married couples federal acknowledgment for the first time, ever. It also granted couples rights previously only given to heterosexual couples. Although Windsor passed away in 2017, her legacy lives on.

Born in 1929 in Philadelphia, Windsor was raised by her Jewish immigrant parents alongside two other siblings. Although she dated men high school, she recalls having crushes on girls, and even married her brother's friend before getting divorced shortly after. Windsow met her wife, Dr. Linda Spyer in 1963 while living in New York City, at a Greenwich Village restaurant that catered to lesbian women on Friday nights. They were together for forty years, until Spyer passed away in 2009 after a long battle with multiple sclerosis and other health issues.

Following Spyer's death, she left her estate to Windsor. However, the IRS denied her the unlimited spousal exemption from federal estate taxes, that was available to married heterosexuals. She had to pay taxes of $363,053. Windsor disputed this and sued, claiming it was "differential treatment." The Supreme Court ruled in her favor, and in doing so, struck down the Defense of Marriage Act's definition of marriage -- and rendered it invalid. This ruling was a game changer in gay rights, with Windsor at its epicenter.

Cecilia Chung is a transgender activist and civil rights leader. She is a champion of fighting for LGBTQ+ rights, HIV/AIDS awareness, social justice, and health advocacy. Chung was born in Hong Kong in 1965, and immigrated with her family to California in 1984. She earned her Bachelor's degree in international management in 1987 and later worked as a sales trainer at a financial company and court interpeter.

In 1992, Chung began her transition. She became estranged from her family, and lost employment. In turn, Chung became a sex worker to survive and struggled with homelessness and drug use. In 1995, Chung was stabbed during an attempted sexual assault and taken to the emergency room. Her mother, her emergency contact, came to visited her and they reconciled.

Chung went on to make a big difference in local trans and gay rights, especially in regards to health advocacy. She was the first transgender woman and first Asian to be elected to lead the Board of Directors of the San Francisco Lesbian, Gay, Bisexual, and Transgender Pride Celebration, and the first trans woman, as well as the first person living openly with HIV to Chair the San Francisco Human Rights Commission. She was one of the founders of the Trans March, and  founded the San Francisco Transgender Advocacy and Mentorship (SF TEAM) to provide events for the transgender community. She also helped make San Francisco the first city in the country to pay for gender reassignment surgery for uninsured transgender patients while she was on the city's the Health Commission in 2013. That year, was also appointed to serve on the Presidential Advisory Council on HIV/AIDS, the current chair of US PLHIV Caucus and is also the Senior Director of Strategic Projects at the Transgender Law Center. As an Asian transgender woman living with HIV, she has dedicated herself to ending stigma, discrimination, and violence in all communities.