Why Bivisibility Day is So Important 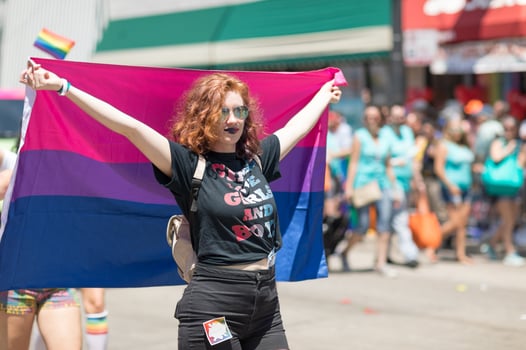 “Pride: a feeling or deep pleasure or satisfaction derived from one's own achievements, the achievements of those with whom one is closely associated, or from qualities or possessions that are widely admired.”

Taking pride in who are you is one of the most important actions you can take for yourself. Sometimes, it is easier said than done.

Although bisexual folks are included in the LGBTQ spectrum, they are sometimes marginalized, both inside and outside of that community. Bisexuals, like gays and lesbians, also face stigma and negativity, and deal with bi-specific discrimination. Often, bi people feel they are invisible, or even stand in the shadow of the general LGBTQ community.

And while annual Pride celebrations every year exist to celebrate all members of the LGBTQ community, bi people have their own Bi-Visibility Day each year. Every September 23, bisexual folks celebrate who they are and embrace themselves and their community.

What does bisexual mean?

Being bisexual is different for everyone. An individual that is attracted (emotionally, romantically, and/or physically) to more than one gender can identify as bi. But, it is important to note there are also a plethora of other ways for folks to identify. For many bisexuals, their sexual preference is a spectrum and fluid.

How did Bi-Visibility Day start?

Celebrate Bisexual, or Bi-Visibility Day began in 1999, by three bisexual activists: Wendy Curry, Michael Page, and Gigi Raven. The three of them sought a way for bisexuals to embrace and celebrate their identity, separate from that of other LGBTQ-designated days.

The trio decided Celebrate Bisexual Day would be September 23 – which is Raven’s birthday, and coincidentally Freddie Mercury’s birth month.

Since its inception, Celebrate Bisexual Day has gained national and international recognition, with organizations and governments publicly endorsing it.

Why is it important?

Unfortunately, many bi people are told that their sexuality is just a phase, or that they choose to be more attracted to one gender over another. This lends way to bisexual folks facing prejudice within the LGBTQ communities, as well as outside of it.

Feeling validated, represented and understood are all essential components when supporting a person’s identity. Additionally, creating visibility and awareness contributes to bisexual folks’ sense of being understood and respected – as well as finding allies. Bi-Visibility Day aims to accomplish just that – all while upholding a sense of pride in a person’s identity.

At Apicha CHC, we want our patients to feel comfortable, respected, and safe. We promote a culture of inclusivity, meaning we approach patient care in a conscious and thoughtful way. Our providers and staff are trained to be mindful and sensitive of each patient’s needs, as well as how they identify. For example, we do not assume an individual’s sexual orientation, and we ask them what their preferred pronouns are. Our goal is provide patients with the best possible care, and we do so in an inclusive, welcoming way. If you’re interested in scheduling appointment, you can click the link below.