Transgender Resources: What is Genderqueer? 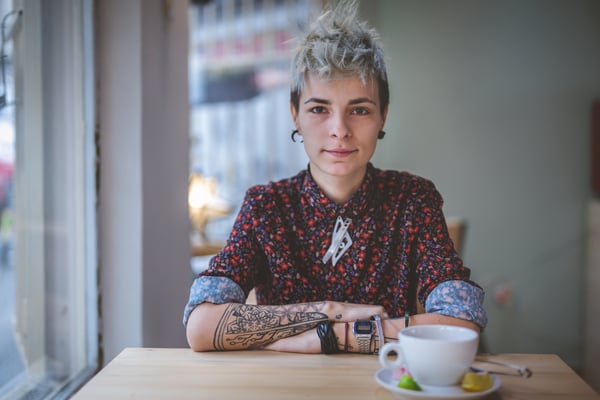 Apicha Community Health Center is continuing its blog series on transgender resources with this introduction to the term genderqueer.

Before we say anything about what “genderqueer” is, it’s important for everyone to know that this is a fairly new term and different people may have different understandings of what it means to be genderqueer.

Since the term “genderqueer” is complex and constantly changing, it’s been hard for those who live outside of those boundaries to understand and accept the people who identify as that subculture.

To explain this term, you have to start by talking about the idea of gender binary.  “Gender Binary” means grouping sex and gender into two distinct, opposite, and disconnected ideas of masculine and feminine.

This post uses genderqueer as an umbrella term that includes any individual who feels that binary terms such as male and female are lacking because their gender identity does not fit into either of the male or female category.

Every person may have a different understanding of what genderqueer (or non-binary) is and those who identify with it may define their gender differently from other people who also identify as genderqueer. What it really comes down to is how an individual chooses to define themselves on the gender spectrum.

Have you been looking for a quality transgender healthcare provider? Apicha CHC is fully staffed to help you! Request an appointment.

Certain genderqueer people may identify themselves as living in between the gender binaries, some define it by living outside the gender binaries, and some may even reject the belief of the binaries entirely. Some people might identify more with a particular gender while others do not. Some may choose to go through surgery or take hormones while others choose not to.

The main commonality is that they all feel a profound and constant uncomfortableness with only fitting into one binary gender that they were assigned to at birth. Other than that, anything from gender expression, sexual orientation, and experience depends entirely on the individual and that individual alone.

What is the difference between genderqueer and transgender?

While there are still some grey areas regarding the answer to this question, the general consensus is that genderqueer falls under the transgender umbrella. Transgender is an overarching term that refers to anyone who is not cisgender or cissexual.

Not every genderqueer person identifies as transgender, but genderqueerness falls under the transgender umbrella. Those who identify as transgender have a gender that is different from the one they were assigned at birth and by society. If you’re genderqueer or non-binary, you identify outside the traditional genders of man and woman.

How can I make sure I respect someone’s gender identity?

Since genderqueerness changes from person to person, it really comes down to listening to what each person says about themselves, accepting that this is true for them, and then not trying to assert your own beliefs of their gender identity upon them.

Because of societal norms, it feels awkward to just ask someone: “what pronouns do you use?”, but for anyone who doesn’t identify as cisgender, it goes a long way in acknowledging the different aspects of their identity.

You’re going to have to ask a lot of questions like: what name do they use, how you should address them in public and private (since they might not be completely out), and what genderqueer means to them.

It’s important to respect what they ask for and not try to force your own opinions on their gender on them. It is a learning process and may take some time to get used to, but it’s a small price to pay in order to show someone that you respect that person’s sense of self.

For many individuals that identify as genderqueer, their gender identity is fluid and may be constantly evolving over the years. The way they express themselves, the pronouns or names they use, their physical transition and other things may all change.

Figuring yourself out may be a difficult and long process, but it’s something everyone should be able to do without fear of how others will react or perceive them.

If You’re Trans*, Live in New York City, and Don’t Have a Medical Provider, Consider Coming to Apicha CHC!

Check our calendar for the next Trans* Orientation Sessions for trans* folk to come in and learn about Apicha CHC’s Trans* Health Clinic.