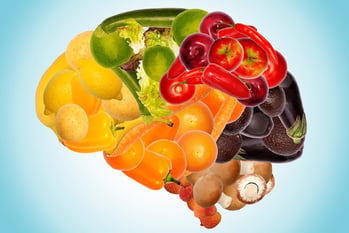 Eating healthier is more important than ever, with obesity and diabetes rates on the rise. Living in New York City also makes it more difficult to eat healthy when everyone is on-the-go and doesn't have extra time.

However, there are small adjustments that can be made towards eating healthier that take a minimal amount of time and effort.

It is clichéd but true: breakfast is one of the most important meals of the day.

People normally skip breakfast due to a time crunch in the morning hours, so tips to focus on are quick and healthy options for meals that can be taken on-the-go.

An excellent choice for breakfast is scrambled eggs with vegetables in a whole grain tortilla - a healthy alternative to an EggMcmuffin-type breakfast sandwich, but it still has the protein to fill you up.

When was your last checkup? Request an appointment

If you do not have enough time in the morning for that, you can make overnight oats: soaking oatmeal overnight, and then adding toppings of your choice, such as frozen fruit or nuts. Another option is a breakfast smoothie: if you prep everything the night before, you just have to throw it all in a blender and can put it in a tumbler for easy travel.

If you normally eat rice for breakfast, consider switching from white rice to brown rice. Brown rice is considered a whole grain, which is easier for your body to digest.

Portion sizes in our food have been growing exponentially over the last couple of decades.

One of the most popular chain restaurants in the U.S. is the Cheesecake Factory, known for their large portions. Their Fettuccini Alfredo with Chicken, voted “The Worst Pasta Dish” by the popular book series Eat This Not That, contains 2,300 calories. The average active adult male needs to consume 2000-3000 calories depending on height and weight. That one dish is a large portion of daily calories.

A quick tip is to cut meals in half. The popular Chipotle burrito averages over 1000 calories when made with meat. Eating half of that, and saving the other half for another meal, is an easy way to cut down on portion size and calories. 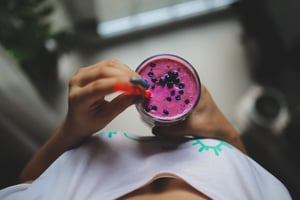 Soda is no longer the sole culprit of sugary drinks.

Now there are café mochas, energy drinks, and even the once innocent juice is now responsible for the fact that, according to the American Journal of Clinical Nutrition, around 37% of our total daily liquid calories come from sugar-sweetened drinks.

The calories add up quicker than you might think. A Double Gulp, from 7-11’s popular Gulp drinks is 50 ounces, and if it’s filled with Coke has about 600 calories, which is almost 25% of the recommended caloric intake for a 30-year old man who exercises regularly.

A simple tip is to switch out soda or an energy drink for water. If you really need that caffeine, drink a small coffee with a natural sweetener, such as Truvia or Splenda.

While the food pyramid has been drilled into the national psyche since the days of grade school, it never hurts to revisit it. Most Americans are getting more than enough protein and grains but many lack enough fresh fruits and vegetables in their diet.

According to the North Carolina Potato Association, the potato is the second most consumed food in the U.S. after milk products, and the average American eats 142 pounds of potatoes a year-this equals out to almost 365 potatoes, or a potato a day.

While there is nothing inherently evil about this innocuous root vegetable, most Americans are consuming them in French fry form, which means fried in oil and sprinkled with salt.

An easy tip is to substitute French fries with a fruit cup or a side of vegetables the next time your order: many fast food places and restaurants now offer alternatives to the typical French fry side.

If you’re on the go, pick up some bananas or other fruits and veggies at the stands that can be found on the corners of many NYC neighborhoods, including Chinatown.

These are just several time saving tips for healthy eating. Do have any tips or tricks for healthier eating?