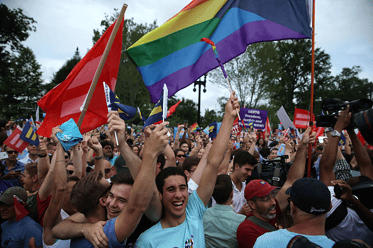 The Supreme Court ruled on Friday, June 26, that the Constitution guarantees a nationwide right to same-sex marriage—a huge victory for the gay rights movement!

The justices found that under the 14th Amendment, states must issue marriage licenses to same-sex couples and recognize same-sex marriages that were legally performed in other states.

In the majority opinion, Kennedy writes, “No union is more profound than marriage".

The stories of the people asking for the right to marry "reveal that they seek not to denigrate marriage but rather to live their lives, or honor their spouses' memory, joined by its bond," Kennedy continued.

The dissenting opinion was written by Chief Justice, John Roberts. His argument centered around the need to preserve states' rights over what he viewed as following the turn of public opinion. In ruling in favor of gay marriage, he said "five lawyers have closed the debate and enacted their own vision of marriage as a matter of constitutional law."

The court's decision mirrors the majority opinion of the United States—LGBT people deserve the right to marriage! This opinion has been long held by Apicha Community Health Center and today we join the nation in celebration.

We continue to advocate for the rights of LGBT people and look forward to celebrating future victories!

History of Same-Sex Marriage in the Supreme Court

This ruling is a long time coming after decades of legal battles and votes at the state level to secure these rights.

In recent years, the Supreme Court has made several decisions that mirrored the nationwide gain in acceptance of same-sex marriage. In October 2014 the court refused to hear appeals of cases from rulings allowing same-sex marriage in five states. The result of not hearing these cases was expanding the number of states that allow same-sex marriage to 24.

Additionally, two years earlier to the day, June 26, 2013, the Supreme Court ruled on United States v. Windsor. This ruling struck down part of the Defense of Marriage Act that barred federal benefits for same-sex couples married in states that allowed same-sex marriage.

With LGBT Pride being held in New York City, San Francisco, and many other cities across the nation, this ruling comes at the perfect time to celebrate. The ruling ensures the weekend’s celebrations will be extra joyous.

The political figures who advocate for LGBT New Yorkers are celebrating today as well.

“Today, the Supreme Court continued our country's march toward a more perfect union and once again proved we are a nation always striving toward fairness, decency and justice.

From this moment on and for generations to come, marriage equality is a civil and human right for LGBTQ couples and no one – no matter where you live in this country or who you love – will be denied that right…

As we celebrate this momentous decision, we must remind ourselves that the struggle for LGBTQ justice is not over. There are too many LGBTQ people suffering from unjust and pervasive discrimination all over the world and we will not rest until those injustices are made right. 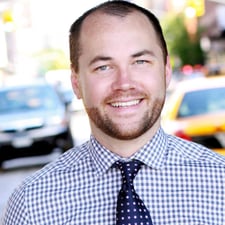 New York Mayor, Bill de Blasio (follow him on Twitter) is set to make remarks this afternoon at 2pm.

There will be a Marriage Equality Pop-up Party and celebration in honor of two couples at City Hall today at 2:00PM.

It is clear that today is a day to bask in a deserved and well-earned victory!