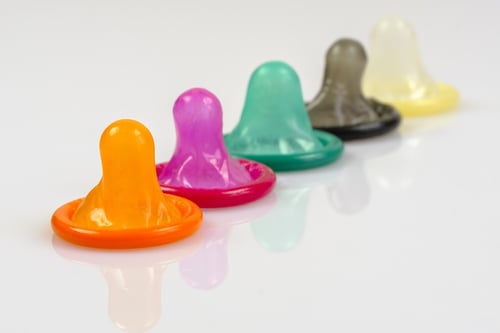 Birth control is how you can prevent pregnancy, even if you are sexually active. It's also a great way to practice safe sex. However, birth control isn't limited to one simple pill or a condom. There are many different forms of birth control options for you to choose from.

While options are great, they can also be overwhelming -- especially when a lot of information is thrown at you. Birth control is part of having safe sex, and in this blog, we're going to go through each of the different types of barrier birth control methods.

Barrier methods act as literal and chemical barriers that block the sperm from fertilizing the egg. One of the most well-known barrier methods is the male condom, but there are several others you should know about.

A female condom is a pouch that is placed inside the vagina to reduce the risk of pregnancy. They are made up of a small ring that is inserted into the vagina and a big ring that remains outside of the vagina during intercourse.

When used correctly, sperm and pre-ejaculate are caught by the condom and never make direct contact with the vagina.

Male condoms are more common than female condoms and can be purchased from most stores. Male condoms are a covering that is placed over the penis during intercourse. They are commonly made from latex, nitrile, polyisoprene, polyurethane, or lambskin.

Both male and female condoms are the only form of birth control that will help protect against STIs and HIV. So even if you are using other birth control methods, it is important to use one to avoid infections.

Spermicide is a substance that reduces the risk of pregnancy by reducing sperm movement. It usually comes in the form of cream, gel, foam, film, or suppositories.

Spermicide is inserted into the vagina before intercourse. It prevents pregnancy by restricting the movement of sperm and blocking the cervix so that sperm cannot reach an egg.

A diaphragm is a dome-shaped device made of silicon, which is inserted into the vagina to cover the cervix and reduce the risk of pregnancy.

Diaphragms prevent pregnancy by putting a barrier between the vagina and the cervix, preventing sperm from accessing an egg. Diaphragms usually have spermicide to increase effectiveness.

Birth control is an important part of women's health, but it's also a big decision, as you need to make sure you're getting the right birth control method for you.

If you have any additional questions about birth control methods or are interested in getting birth control, request an appointment with Apicha Community Health Center. Our competent, caring, and non-judgemental providers will help you make sure you're getting the best birth control method for you. We also offer many other women's health services, which you can learn more about here.