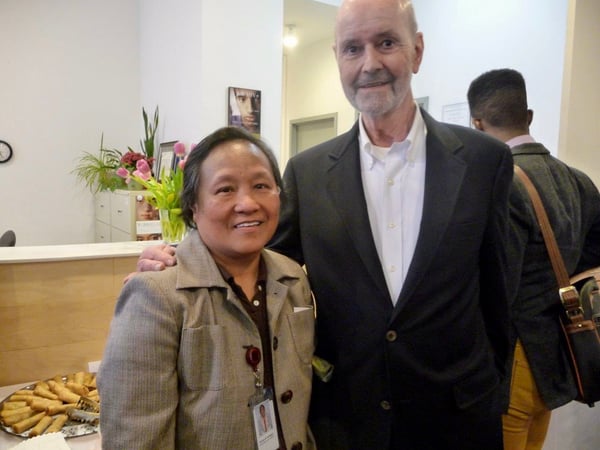 We mourn the passing of our dear friend and funder, Henry van Ameringen. Henry used his philanthropy to bridge the gaps in health equity and justice revealed by the AIDS crisis. He was proactive, seeking out organizations who were helping the most stigmatized and vulnerable and offering financial assistance. He was selfless, humble, and deeply curious.

Apicha experienced all of these qualities firsthand. Henry was searching for a community-based organization that was filling the unmet needs of the HIV-positive, Asian and Pacific Islander community. He found Apicha, then known as Asian & Pacific Islander Coalition on HIV/AIDS, and offered funding to continue its mission. In 1997, I was new to Apicha and Henry reached out for a meeting with me and my staff to get an update on the organization’s progress. At the end of that meeting, he vowed to provide yearly general operating support and to visit annually. He kept that promise, visiting until he was physically unable to do so. These visits were treasured by me and staff alike. Henry generously offered his time, his thoughts, and his encouragement.

In lieu of his yearly tour, Henry asked for an in-depth report on the organization. After studying the document, the two of us would meet for lunch to discuss Apicha’s development. I knew to expect a bevy of questions because of his close reading of the annual report. He had genuine interest, keen advice, and honest insight--all of which were invaluable.

Henry was a partner in every step of Apicha’s journey. In addition to annual general operating support, he provided support for our original Queen’s expansion. Like any partnership, we did not always agree. He was initially reserved about Apicha’s move into primary care, but ultimately, was instrumental in moving our operations to 150 Lafayette Street and opening our first clinic. When we were forced to move to a new location, he provided capital funding to build our current facility at 400 Broadway. Without hesitation, he supported our opening a second clinic in Jackson Heights.

He stood by Apicha through the decades, making possible our growth. Henry continued to challenge and inspire us to find innovative ways of delivering our programs and garnering support for them. He created matching grants. He encouraged other philanthropists to help us. Henry was invested in Apicha, our mission and our survival.

Apicha CHC’s relationship with Henry van Ameringen is a testament to his devotion to supporting marginalized communities by helping people stigmatized by HIV or facing homophobia. He served as a guiding light, an advisor, and a friend.

We will miss him dearly and are honored to be part of his legacy.