Wurtzbach has been an ambassador for Apicha since winning the title of Miss Universe and has used her platform to create more awareness for the disease and healthy steps to prevent it by breaking the stigma.

Prior to moving to New York City, Wurtzbach worked with other groups in the Philippines as an advocate for HIV/AIDS awareness, education, and prevention in her country.

Learn more about the event

The public test took place in advance of National HIV Testing Day on Monday, June 27th when special testing events will be held around the United States.

Ending the stigma associated with testing that exists in many parts of the world is critical to ending the HIV/AIDS epidemic as it is estimated that 17.1 million of the 36.9 million people living with HIV worldwide do not know they are infected.

Eric Sawyer, Civil Society Partnership Advisor to the Liaison Office New York at the United Nations, was present to make remarks and stated that the United Nations operates under the 90/90/90 goal regarding HIV, “In order to get the HIV epidemic under control, we have to have at least 90% of the people in the world who are infected with HIV to know their status, we have to have 90% of those people on drugs, and we have to have 90% of those people attain an undetectable viral load… And that’s why promoting testing as Pia has done here today is so important.”

Wurtzbach was tested using an Alere Fourth Generation rapid test that used a finger prick to collect the sample. Wurtzbach addressed the gathered crowd, “National HIV Testing Day is a reminder to get tested, and take care of not only your health, but your love ones’ health too. It is important to know the facts, and be proactive about protecting yourself, your partners and your community.”  She continued, “I’m here to tell you [HIV testing] is so easy, painless, AND confidential.”

At the event Apicha CHC’s Chief Executive officer, Therese Rodriguez, stressed the importance of the occasion, “I hope that her generous act of courage will inspire all societies, especially our beloved Philippines…to support her efforts and lend her a hand in breaking the HIV stigma.”

Where can you get tested?

To find a testing site near you, 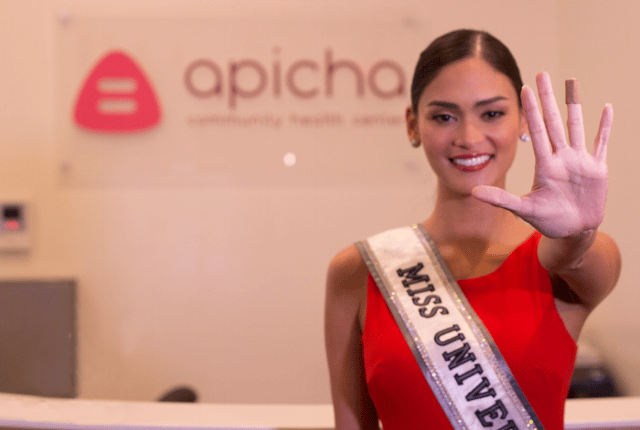