How to Use Inclusive Intersex Language 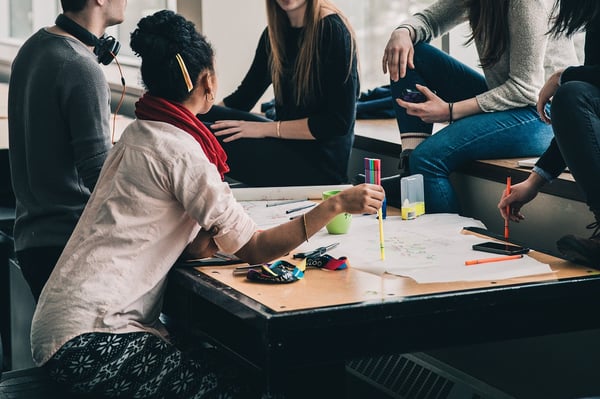 Do you know every word that LGBTQIA stands for? If so, great. If not, don’t worry. In this blog we’re going to break down for you one of these words and how to talk about it: intersex.

Intersex means someone is born with a combination of male and female biological characteristics, like chromosomes or genitals.

Being intersex is a naturally occurring variation in humans, and isn’t a medical problem. It’s also more common than most people realize. It’s hard to know exactly how many people are intersex, but estimates suggest that about 1 in 100 people born in the U.S. is intersex.

However, there is certainly a stigma when it comes to discussing intersex folks. Many people do not understand how to refer to an intersex individual’s identity. Like anyone else, they want to be referred to and spoken to in the correct terminology. If you’re having trouble understanding, think of how many LGBTQIA people have preferred pronouns. Using inclusive intersex language is sort of the same.

In order to reduce that stigma, and use correct and inclusive language, here are some dos and don'ts when talking about things related to intersex.

The Dos and Don’ts of Using Intersex Language

Instead Use: "Sex Traits"

Here’s why: People are born with sex traits, including chromosomes, genitals, and reproductive organs, but these may not line up into what most people think of as one biological gender. In case you didn’t know, gender is a social and cultural construct. Someone’s gender may not corresponding to what others expect based on their bodily sex trails, although society commonly ties sex and gender together.

Instead Use: "Born with genitalia outside of the typical male/female binary"

Here’s Why: Genitals do not determine gender, and we can never tell for sure what someone’s gender will be by how they look when they are born. It’s all up to that person to figure out as they grow.

Instead Use: "Born intersex, or born with different sex traits"

Here’s Why: With most people’s binary understand of sex, this could imply a person was born with two sets of genitalia, which is not possible. It also assumes being a man or woman depends on sex traits at birth, and implies these are the only two options.

Instead Use: "XX/XY chromosomes"

Here’s Why: Call parts what they are without gendering them. Many people who are women have XX chromosomes, and many don’t. Some people with XX chromosomes don’t have a female gender identity. Intersex people can also have chromosome patterns that are not XX or XY.

Here’s Why: If you really need to talk about someone’s genitals in the first place, these may be the best terms to use. To clarify: Body parts don’t have genders. You wouldn’t say “male arm” or “female arm,” so why name any other parts this way? Remember that intersex and transgender folks can have sex traits often associated with a different gender.

Instead Use: "Assigned male or female at birth"

Here’s Why: Babies are assigned a gender based on what their genitals look like. Those assignments might not always be accurate once the child grows up.

Instead Use: "Multiple sexes/genders"

Here’s Why: There are more than two genders! And, many combinations of sex traits! So using the term “both,” implies that there are only two, which isn’t true.

Instead Use: "My intersex experience"

Using the inclusive language when talking about intersex is important. It matters to people, even when you may not know it.