In honor of Black History Month, Apicha CHC will be writing a series commemorating some of the people and legacies that continue to call us forward to keep fighting, supporting, and forging new paths in the work that we do.

We thank you, all of you, deeply. 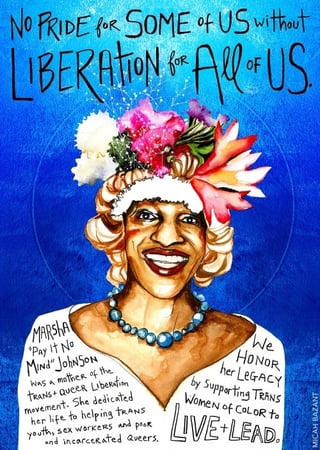 Marsha P. Johnson is a Black transgender woman who we've come to know as one of the most fundamental activists of the LGBTQ+ liberation movement. She was a fierce force of nature, living as her most authentic self and fighting tirelessly for the rights of LGBTQ+ people in New York City and beyond.

The documentation of the Stonewall Riots has long been centered around the stories of white gay men, once again invisibilising people of color and Black leaders in these monumental times in our nation's history.

In 2015, Rolland Emmerich debuted his film, "Stonewall." The film was a really drastic white-washing of the historical riots that were crucial to LGBTQ+ liberation. For far too long the history has completely erased the herstories, especially of the Transgender Women of Color that initiated the riots and were the primary actors and leaders.

Marsha P Johnson and Sylvia Rivera, a transgender Latina who was another fundamental actor in standing up against the police at the Stonewall bar on that fateful night, moved forward to start some of the most critical activism in NYC during the 1970s.

Johnson and Rivera had also experienced homelessness themselves and felt like much of the activism largely ignored transgender people and people of color that were living on the streets and experiencing the intersectional realities of homelessness, queerness and race.

Her Legacy Lives On!

"Pay It No Mind" is the final glimpse we get of Marsha P. Johnson before she passed in 1992. The documentary reccounts Johnson's life, her intoxicating passion and personality, the people who loved her and the magnitude of her impact on what we know today as liberation.