World AIDS Day is December 1. During this day, folks unite against HIV, support those battling HIV, and commemorate those who have died from an AIDS-related illness.

Join Apicha CHC and other organizations to commemorate World AIDS Day on Monday, December 2. This year's theme is "Community."

This event is free and open to all. Doors open at 10 am and complimentary continental breakfast will be served. 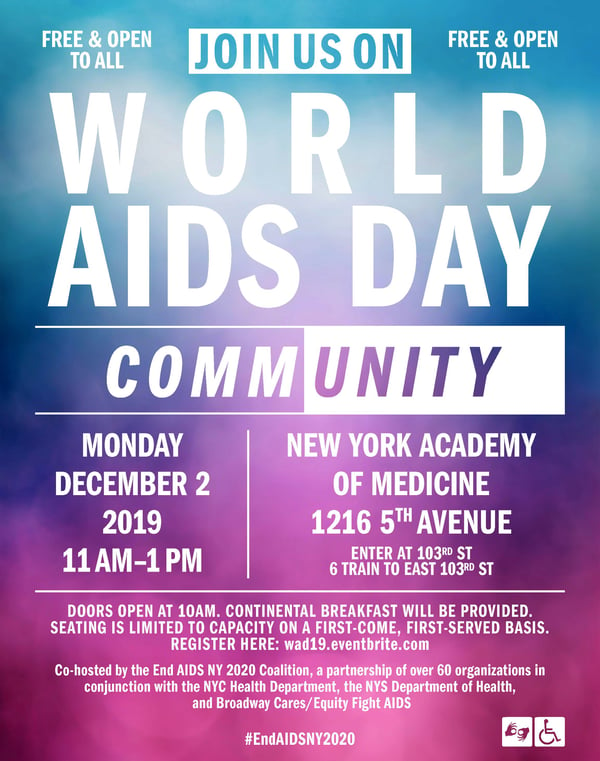 Although the virus was first named in 1981, World AIDS Day began in 1988. It is also the first ever world health day.

In October 2017, the Centers for Disease Control released a historic statement, formally declaring people who are living with HIV and are undetectable do not pose a risk of transmitting HIV. Not only does the CDC's statement build a strong case for the use of PrEP - regardless of a person's HIV status - it helps break down the stigma associated with folks living with HIV.

In 2019, the Health Resources and Services Administration has unveiled its new plan to help end the HIV/AIDS epidemic by 2030. "Ending the Epidemic: A Plan for America," will use new data and tools available to reduce new HIV infections in the United States by 75 percent in five years and by 90 percent by 2030. You can read more about the plan here.

Apicha Community Health Center was formerly Asian and Pacific Islander Coalition on HIV/AIDS. It was founded in 1989 when APIs, along with the Native American Indians, were in the “Other” category of AIDS surveillance data. Gay activists and civil rights advocates from both communities marched on Washington, DC and successfully convinced the federal government to add two columns in the census count – API and American Indian and Native Alaskan.

As Apicha CHC expands its services, we continue to serve our legacy populations: people living with HIV/AIDS, APIs, and the LGBT community. Nowhere is this more apparent than in our work to End the HIV/AIDS Epidemic (ETE). In 2016, Apicha CHC worked tirelessly to meet the goals outlined in Governor Cuomo’s three-pillar ETE plan. Apicha CHC excels in all three pillars: 1) diagnosing people with HIV and linking them to care; 2) retaining them care and getting them virally load suppressed; and 3) facilitating access to PREP/PEP for people who are high-risk HIV-negative.