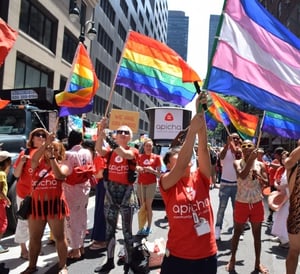 Apicha Community Health Center is honored to be chosen as one of the Grand Marshals for this year’s Queens Pride Parade, which will be held this Sunday, June 7th.

We are proud to be part of building the LGBT community in Queens.

Why Apicha was Chosen as Grand Marshal

In choosing Apicha CHC as one of its Grand Marshals, Queens Pride stated, “We are very supportive of Apicha’s work in Queens and the idea of an Apicha run health center that could be based in Jackson Heights is something we strongly support”.

“Dr. Robert Murayama and I sketched a dream on a page of my notebook. We shared this drawing with Council Member Daniel Dromm who serves Jackson Heights, then with the network of LGBT organizations in Queens and also with the Asian Americans for Equality known for building affordable housing.

With them we imagined a co-located Apicha Community Health Center and LGBT Center housed in a state of the art affordable housing complex. A place where A&PI/LGBT can have the freedom to be themselves, be comfortable in who they are,” said Therese.

Have you been searching for non-discriminatory LGBT health care? Request an appointment

Apicha CHC is elated our dream is resonating with the community of Jackson Heights and its leaders.

The diversity found in Jackson Heights and the adjacent neighborhoods mirrors the diversity of Apicha CHC’s patients, providers and staff. The neighborhood is a hub for LGBT activity, and is home to large numbers of South Asians, East Asians and South Americans, particularly Argentineans and Columbians—many of whom are immigrants and are multilingual or speak a language other than English.

Apicha prides itself on providing services designed specifically for these communities and looks forward to finding a permanent home in the neighborhood in the near future.

The 2015 Queens Pride Parade and Festival held in Jackson Heights, Queens, NY, welcomes everyone to “celebrate 23 years of visibility, the fight for social justice and the celebration of community.” This year's theme is PRIDE - STRENGTH - UNITY. 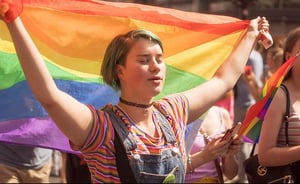 The parade is held on 37th Avenue and starts at 89th Street traveling to 75th Street. This year the festivities kick-off at noon. There will be a reviewing stand at 37th Avenue between 79th and 80th Streets.

After the parade, Apicha CHC will also participate in the Queens Pride Festival located at 75th Street and 37th Road. We will be on site providing free HIV/STD testing,insurance enrollment, and nutrition assistance enrollment.

The Queens Pride and Club Evolution stages will provide entertainment throughout the afternoon, beginning at 1:30pm and ending at 6pm. Entertainment includes singers, comedians, drag acts, dance groups and much more.

This year’s headline performer is multi-platinum recording artist, CeCe Peniston, who made her mark in 1991 with the hit "Finally.” Vendors, food and informative business, community and social group booths are located throughout the festival site.

Apicha CHC is looking forward to partaking in a fun day of celebrating Pride in Queens. For more detailed information on the Queens Pride Parade and Festival, go here.

And come check out our Facebook Event page for everything Apicha CHC will be doing this weekend! We hope you come out and join us!