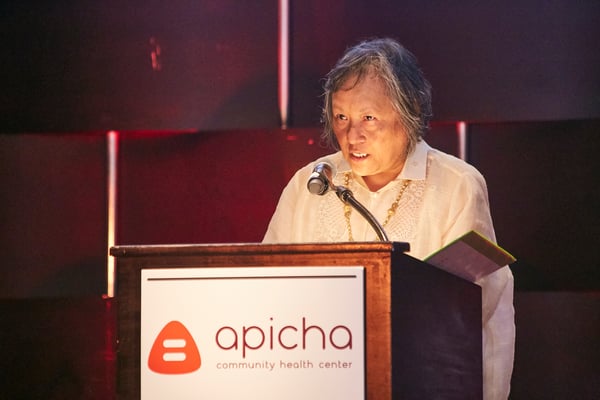 It was a night filled with calls to action and inspiration to continue providing access to underserved communities. Apicha CHC's CEO Therese Rodriguez, drove home that message with a powerful speech.

You can read it in full below:

I dedicate my speech to the late Mars Custodio, who served as a devoted member of the board of Apicha.

Tonight, we celebrate Apicha’s many accomplishments, but take pause as these are uncertain times. We’ve been inundated, shaken, slammed to our very core by an unlikely force, albeit duly elected. An energized grievance social movement catapulted their mouthpiece to the White House. Giving voice to extreme nationalism, a nod to white supremacy, and allowing the use of state resources to incite xenophobia, religious intolerance, and discrimination based on sexual orientation and gender identity. The torrent of 140-character midnight tweets, flexing war muscles over diplomacy, attacking the media and the First Amendment, and doubling down on the degradation of the environment. The fabric of democracy is frayed, and so are our nerves. On top of it all, we are subjected to an onslaught of salacious infidelities and blatant lies, exposing the hypocrisy, corruption, and alternative facts untethered to truth. GIVE...US…ALL…A…BREAK!

The existential reality we live in, is hurting millions. Many without adequate food. Many delaying medical care so they can put food on the table. Many live in virtual police state -- pulled over, detained and sadly killed for so-called “serious” offenses, like barbecuing in grandma’s backyard, driving with busted tail lights, or just waiting for friends at a Starbucks. They are moms and dads raising families, deported, snatched from their children. They are people living with HIV/AIDS, gay and transgender folks, who have escaped from repressive societies, and now, ironically, beaten and left for dead on the hostile streets of America.

Threads pulled … unraveling the tapestry of freedom, inclusion and equality.

Many of the thousands of lives touched by Apicha -- in our facility, in bars, private parties, and internet hook up spaces -- are weary souls. Many are sick, speaking only survival English, with no health insurance and no clue on how to navigate our fragmented health system. Many seek Apicha to find a safe space and its culturally competent, quality health and wellness services. They come nervous because they may have HIV. They come for HIV prevention medication -- PrEP. Many need counsel for a life of anxiety, stress and depression. They need supplemental nutrition assistance; need information on sexual health. The transgender, gender non-conforming folks come for services to align with what and who they are.

An academic paper on birth outcomes in California stated that infants born to Arab American women 6 months after 9/11 -- a period of increased discrimination against Arab Americans -- had an increased risk of low birth weight and pre-term birth, compared to those born 6 months before. In comparison, for other racial and ethnic groups there was no change in birth outcome risk, pre-and post-9/11. Personal experiences of abuse and discrimination linked to 9/11 were also associated with psychological distress and poor health status among Arab Americans, greatly affecting their quality of life.

Lastly, in 2001, a time of multiple anti-immigrant legislative proposals, Latino and other immigrants reported higher psychological distress than native-born respondents. Surely we can conclude that the current environment can only deepen health disparities.

At Apicha, we address these issues. We accompany folks to social service agencies, help prepare documents for political asylum applications, including name change, enroll clients into state insurance, AIDS Drug Assistance Program and other managed care plans. We visit clients’ homes to observe actual intake of medication. We even check if they have food in the refrigerator or have windows for ventilation. We do not let go. We do not compromise on compassionate and quality care.

Ask City Council Speaker Corey Johnson. He can attest to this type of attention that he received from Apicha when he was just in his 20’s.

To meet our remarkable growth, Apicha will open a second health center in the Jackson Heights area, in Queens. It is home to the most diverse populations in the city. They come from Central America, Asia and Europe. NYT archives reported that: Jackson Heights has been a gay mecca since the 1920's when the quick subway ride to Times Square drew vaudevillians here. And in recent years, as immigrants from Latin America have transformed the neighborhood, the area has turned into New York City's epicenter for gay Hispanic people. It’s a established fact that continues up to today.

Apicha JHTS is the fulfillment of a dream and a promise -- a commitment to bring care to underserved and diverse communities. Opening a second clinic is a source of tremendous pride for us. Transforming an AIDS service organization to a community health center is not a painless endeavor. But more than just a lot of chutzpah, becoming a federally qualified health center is being true to our roots.

Our founders fought to remove Asian and Pacific Islanders and Native American Indians from the “other” category of the AIDS data. Apicha’s history is part of the struggle for equality, a history intrinsically linked to the noble civil rights movement. At the heart of the civil rights movement and President Lyndon Johnson’s War on Poverty is the demand for affordable health care. African-American physicians and human rights activists like Dr. Jack Geiger worked with Martin Luther King, Jr., to build the first community health centers in the U.S. – one in Boston and the other in Mississippi. This model of care was developed among the poor in South Africa. The services and care for the homeless, residents of public housing, and migrant agricultural workers were later incorporated into the health center system. There are now over 1,300 health centers throughout rural and urban America serving 27 million people!

We consider it a solemn duty to serve those who are the least among us. We are proud to be part of the health center movement. We know that being part of expanding the Medicaid space in NYS comes with a daunting challenge. We must produce positive health outcomes, resulting in less use of emergency rooms and decreased hospitalization. Serving more at best value.

Apicha does not exist in a vacuum. At the core of Apicha’s mission is to make everyone feel that they belong, cared for and empowered to take care of themselves and others. We want Apicha to be an active participant in building a humane, selfless society, devoid of hate and prejudice. We want to be part of strengthening our common bonds and ties, eradicate inhumanity and apathy that are contaminating the very air that we breathe.

The visceral call for “Build the Wall” is one of the shiny objects aimed to distract us from our community building. The construction of the wall, a mosaic of misguided hatred and hostility, is being aggressively pushed forward and used as a bargaining tool for more cuts from services for the poor and the marginalized. The social divide erected -- a sleeping dog awakened by a demagogue.

Life nowadays feels like a 50-foot rogue wave just smashed into our march to progress. We must first throw the weight of hate and prejudice overboard. The weak and the powerless get the life vests. We must to be aware of each other.

In the course of fulfilling our mission, we sometimes encounter resistance from our natural allies. Lost in our individual needs for survival, afraid to lose our advantage due to long and hard-fought gains, we might be afraid to surrender an inch of territory, because it might give an edge to competition or the new kid on the block. On the other hand, there are those among us who lay claim to leadership without the history of genuine working relationships with the community. And, oh, I hear this guilt tripping a lot. “I am more miserable than you are”, “I experience more layers of discrimination than you do”, “I am so tired and so angry -- it is now my turn”, “You are not colored enough,” etc., etc. It feels like “hash tag WalkingOnEggshells.”

We must build trust with each other. Define what ties us together. We need to restore our moral compass, create a social radar that can detect mischief and discord, determine our true north, look to the sun and the stars -- measure their relation to the horizon, respect and study the anger or serenity of the waves, and pray, pray a lot, hope, keep the hope, work hard, work very hard -- that we find our way to shore.

Shoulder to shoulder, we must fight for the soul of this nation. They build walls to heighten society’s fractures, we build the scaffolding and catapults to scale and crush those barriers. Grasp each other’s hands. Link arm in arm. They build walls, we build oases. We find partners. We watch out for each other. We build coalitions, we protect immigrants, we share each other’s burdens. THAT is what Apicha is all about.

We must plan for the long haul and work tirelessly until we can lay claim to our promised land. We shall prevail! We must!

I end with a poem that I started writing in August 2017. I wanted to express the moments of great despair I've experienced, witnessing how forces of reaction have been aggressively trying to normalize racism and xenophobia:

In the jungles of St. Louis

In the state of Missouri

A white policeman on a hunt

Found Not Guilty by a white judge

How many mountains should be leveled?

To have enough stones and rocks

At Goliath as David did?

The only weapon of anger

Looters claim what they can carry

No cash registers to fall in line on

Just a mad rush through those kicked-in doors

Life savings swept away the morning after.

In the streets vivid replay

Of ancestors hanging from tree limbs

For the owner to claim full profit

Of land and slave.

With their bones and ashes.

From a society where

Congregations in the streets

in “The Book of Mormons”

Only hearts can dream

Scaling the thorny and rocky terrain

Of a steep climb

To unburden the cross

On the mountain top

Children of Newtown and Parkland,

And that of Martin Luther King, Jr.’s

Their spirits live on

Movements who now bear the burden of the Dream.

At the top of the world

Where the compass points nowhere

No north-south, no east-west

In the Japanese tradition of Kintsugi

Thank you for being here tonight. We will see you again next year at Gala 2019.