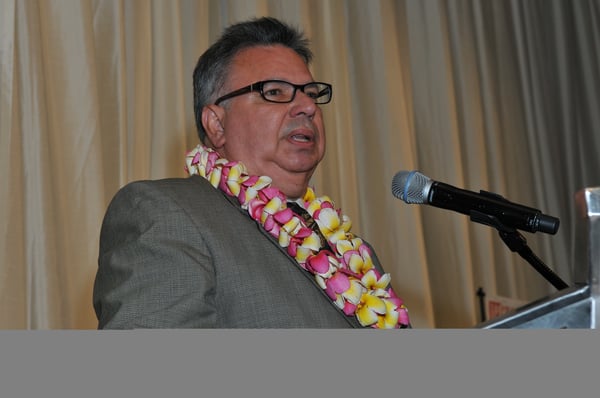 Humberto Cruz in May 2013 when he was honored by Apicha CHC.

It is with deep sorrow and sympathy that we recognize the passing of Humberto Cruz. As the former N.Y. AIDS Institute Director, Humberto was instrumental in fighting the AIDS epidemic in New York State. Humberto was a trailblazer, integrating HIV/AIDS care into the primary setting and mobilizing stakeholders throughout the state to tackle the epidemic. He leaves behind a rich legacy of program innovations – effective, comprehensive care and prevention programs targeted to communities disproportionately affected by HIV/AIDS.

Humberto was among a rarified group of public health professionals who truly understood the plight of people on the margins of society, of people who have the least access to health care. He effortlessly understood when we say that communities of color bear a heavy burden of HIV/AIDS because of stigma, cultural taboos and discrimination. He understood what it means to be gay and HIV-positive in our communities. He was sensitive to the language barriers experienced by immigrants. He comprehended the struggles of a community-based organization as it builds infrastructure while delivering needed services. As HIV funding decreased over the years, his leadership minimized the impact on services to the neediest communities in New York State. In short, Humberto was a pillar of hope and empowerment to all of us.

Humberto was an unwavering ally to Apicha CHC. When Apicha CHC was forced to relocate from our previous space at 150 Lafayette, Humberto responded to our appeal for help. During dire moments such as this, he was always there to connect us with appropriate people and resources, including a grant that helped to ensure our patients had limited service disruption during the organization’s crisis. As he once said in 1997, "The cultural competence present at Apicha is an important contributor to ending the epidemic. It's a virtual United Nations and must be supported."

Over the years, Humberto stood by us as we underwent a transformation from a specialty HIV provider to a federally qualified health center. He helped bridge that transformation by ensuring we were a state-recognized safety net provider.

Without Humberto, Apicha CHC would not be here today. We are eternally grateful for his tireless commitment to fighting the AIDS epidemic and will continue to carry on his legacy. As we continue to strive for bettering the lives of those affected by and living with HIV/AIDS, we remember Humberto’s love and dedication to Apicha CHC, and harness that energy toward our efforts. As Humberto always looked over Apicha CHC and supported us from his New York State post, we now have an angel looking down and supporting us from heaven.