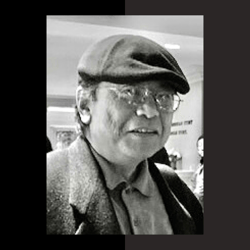 “I generally refer to myself as an ‘ABC from NYC.’ That’s short for American-born Chinese from New York City.” -Corky Lee

Corky Lee was always there. Always.

Apicha CHC is deeply saddened by the untimely passing of Corky Lee, who was a visionary and close friend. Corky left us after losing his battle with COVID-19 on Wednesday, January 27, 2021.

Corky was a world-renowned photographer who dedicated his life’s work to bringing the contributions of Asian and Pacific Islanders (A&PI) to the forefront of American consciousness. Since the 1970s he—and often he alone—documented the lives of A&PIs living in New York—capturing images of their struggles for social justice, recognition, inclusion, and simply their existence.

Much of Corky’s dedication went beyond photography. He often used photography as a tool. He valued visibility above all else. Corky saw the value of A&PIs understanding our history, how we should fight against invisibility, and be acknowledged for our contributions to society. This rings true when we think of his presence at countless A&PI gatherings, from rallies and protests to meetings and everyday life.

In truth, Corky was a historian. His photographs help preserve and protect histories of A&PIs in the United States and abroad. They tell stories that would otherwise be untold. Without Corky, we would not have the visual history that we have today. Corky called this “photographic justice.” His work is invaluable.

Apicha CHC’s early struggles to shine the light on unmet HIV services in the A&PI community were among the issues Corky captured. You may have seen Corky photographing our community events, fundraising events. As Apicha CHC CEO Therese R. Rodriguez recalled, “I first met Corky during the early 1970s, when I was involved in Filipino-American activism and protests. When we would protest the Marcos dictatorship in front of the Philippine Consulate, Corky was there—and at countless other events. Our friendship continued as Apicha CHC evolved from an AIDS Service Organization to a community health center. He photographed, donated photographs for fundraisers, and introduced Apicha CHC to others in the community.”

Stigma of HIV in the A&PI community did not turn Corky away. He was there.

He supported our mission and contributed to our ability to keep our service available, and our voices heard.

It is heartbreaking to learn that before falling ill, Corky was still hard at work documenting lives with his lens. He was also working on a documentary that captured his life and work. Although Corky may no longer be with us, his spirit and legacy will always live on through his photos. He will be remembered and cherished. May he rest in peace.