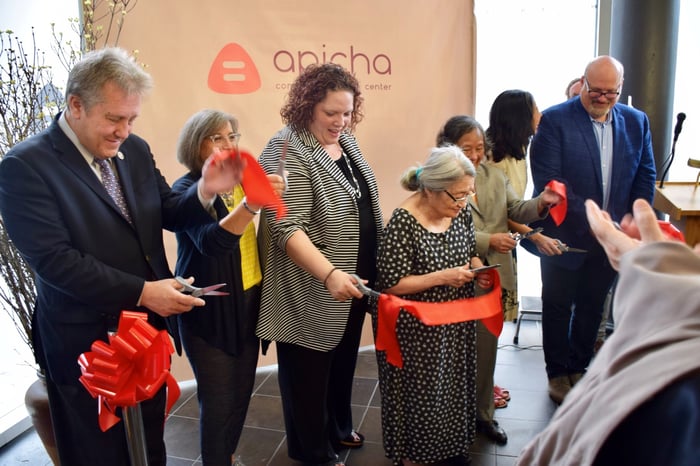 The expansion more than doubles the number of exam rooms and counseling rooms at the center, allowing Apicha CHC to serve even more people who live in Lower Manhattan and its core constituency including Asians and Pacific Islanders, the LGBTQ community, individuals living with and affected by HIV/AIDS, and many other underserved and vulnerable New Yorkers. The new space includes 7 new exam rooms at street level, 5 private rooms for other services and an on-site pharmacy on the lower level. 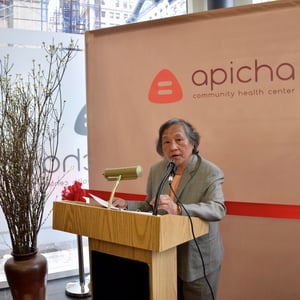 “This expansion is a recommitment to Apicha’s 27-year history of improving the health of our communities and increasing access to comprehensive primary care, preventive health services, mental health and support services. It will allow us to significantly increase our outreach to those who often have the least protections,” said Rodriguez.

“Health care is a human right, a social justice issue, a racial justice issue, an LGBTQ issue, and an immigrant rights issue. Today we rededicate ourselves to ensuring even more underserved and vulnerable New Yorkers are afforded top notch, culturally competent care aimed at improving their health and wellbeing.”

Plans to expand Apicha CHC began in 2013 when the agency received a Vital Access Provider grant from New York State to hire additional primary care and mental health providers, support services staff and other essential administrative staff. Apicha CHC then set plans in motion to expand clinic space to accommodate additional patients. Clinic expansion designs were completed in the Spring 2015 and construction began in October of 2015.

“We are extremely grateful to New York State for its vital support and incredibly thankful to the H. van Ameringen Foundation, as well as City Council Members Margaret Chin, Daniel Dromm and Corey Johnson for helping make the clinic expansion at 400 Broadway possible,” said Gertrudes “Ding” Pajaron, Apicha CHC’s Chief Development Officer. “The clinic expansion allows us to help more members of our community and the new pharmacy adds additional convenience for our patients. All of our staff are thrilled to serve even more of our NYC residents and increase our capacity to further the work we are committed to doing.”

In addition to this expansion, Apicha CHC plans to open a second facility in Jackson Heights, Queens this in the spring of 2018. The Jackson Heights site will offer primary care for adults and children, dental, mental health, life-stabilizing support services, and an LGBTQ meeting room where the organization will engage with the community.

It's important to us that our clients and patients are met with the best care possible and build a...

As we continue to celebrate Asian and Pacific Islander Heritage Month, we are unpacking who exactly...

Everything to Know for Voting in NYC This Year

Voting is an important part of every citizen's right and civic duty and serves as an opportunity to...

May is National Asian and Pacific Islander (API) Heritage Month, which celebrates and honors the...