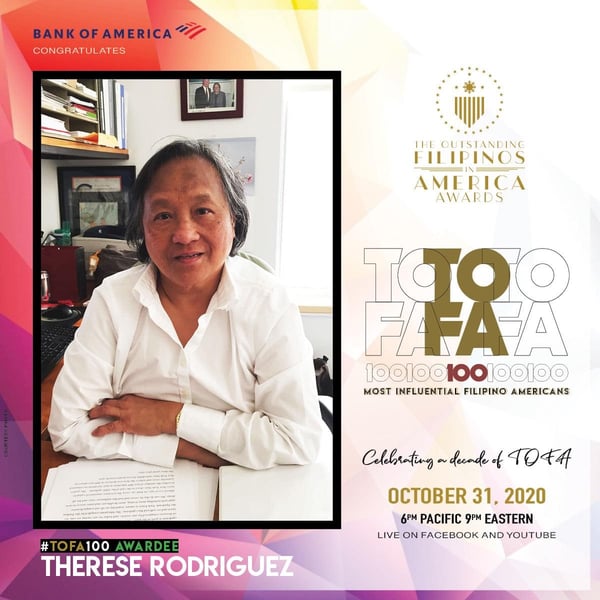 Apicha CHC is excited to announce our CEO Therese R. Rodriguez will be honored as one of the recipients of The Outstanding Filipinos in America (TOFA) Awards on October 31.In conjunction with Filipino American History Month, TOFAs recognize 100 influential Filipino Americans that have made an impact on our society, who range from artists, activists, and leaders in media and healthcare, and more.

"Therese Rodriguez is the CEO of New York City's Apicha Community Health Center, which caters to the primary, preventative, and mental health care needs of vulnerable populations, especially Asians and Pacific Islanders (APIs), the LGBT community, and those with HIV/AIDS. She led the campaign to qualify Apicha as a model of HIV services for APIs in the United States," said Elton Lugay, founder and executive produce of TOFA awards.

"TOFA100: The Most Influential Filipinos in America" will premiere on October 31 at 9pm and stream on YouTube and Facebook. Features performers will include “Ratched” lead actor Jon Jon Briones, Rogue Ballerina Georgina Pazcoguin and legendary pianist Cecile Licad. To read more about the awardees, click here.

Therese R. Rodriguez is the Chief Executive Officer of Apicha Community Health Center, formerly known as Asian & Pacific Islander Coalition on HIV/AIDS. She has led the organization since 1997. Under Therese’s leadership, Apicha CHC transformed from an AIDS Service Organization to a Federally Qualified Health Center (FQHC) in 2015.

Therese currently serves on the Board of the National Minority AIDS Council and was appointed by Governor Andrew Cuomo to the New York State End of AIDS Task Force, to develop recommendations for the blueprint to end the HIV epidemic by 2020. She is a member of the New York State Advisory Council on HIV/AIDS, served as chair of the Asian and Pacific Islander Ending the Epidemic Advisory Group convened by New York State AIDS Institute, and represents Apicha CHC in the National LGBT Primary Care Alliance. In 2020, Rodriguez was appointed to Mayor de Blasio’s Public Health and Healthcare Sector Advisory Council to provide guidance on New York City’s strategy for reopening during the COVID-19 pandemic. Therese was also a member of the NYC Mayor Michael Bloomberg’s Commission for Runaway and Homeless LGBT Youth, which devised strategies to address the unique needs of LGBT youth before they run away. In 2019, Rodriguez was listed amongst Crain’s 2019 Notable Women in Health Care.

Types of Primary Care You Should Know

Primary care is an essential component of staying healthy, and everyone should have a primary care...

10 Reasons Why You Should Get Primary Care

Primary care is an important tool to take care of your health. Getting annual physicals,...

In the past year, anti-Asian violence has skyrocketed. There were over 3,800 reports of anti-Asian...