Apicha Community Health Center is excited to announce the continuation of its series, Apicha and the Arts, where we team up with other organizations in our community to create special events tailored for New York City’s LGBT communities, people living with HIV/AIDS, and people of color.At these events we will enjoy the work created by our communities and learn about new ways to stay healthy to ensure we keep making great art like PrEP—the latest tool to prevent HIV transmission.

It is our hope that these events will provide a space for these communities to come together, celebrate our work, struggles, and achievements, and, most importantly, inspire one another. 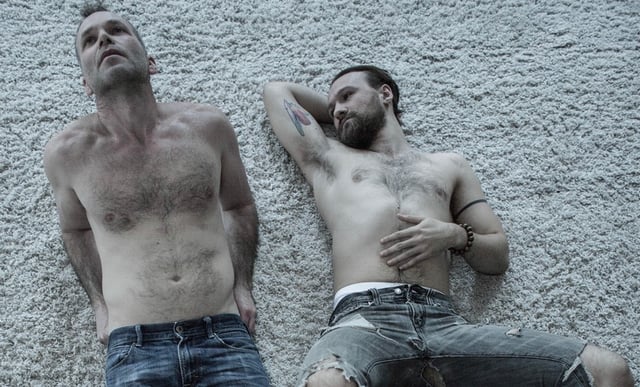 Apicha CHC's Director of Grants and Communication, Phillip Miner, was invited to speak about viral load suppression and PrEP at the performance of Jerker, or The Helping Hand: A Pornographic Elegy with Redeeming Social Value and a Hymn to the Queer Men of San Francisco in Twenty Telephone Calls, Many of Them Dirty by playwright, Robert Chesley.

This play is a provoking exploration into the journey of the heart, the mind, and the body, as well as the unique challenges LGBTQ+ people face when it comes to these parts of themselves and their intimate partners. It also brings up the ever pressing issue of stigma and what stigma has done in the past and continues to do both internally and externally to LGBTQ+ people.

After the performance, Miner led a discussion about the themes of the show and also the importance of viral load suppression and PrEP in reducing stigma today.

An Interview with the Directors and Actors!

Below you can read the entire interview Phillip Miner conducted with the director, David Drake, and actors, Linus Ignatious and Joe MacDougall, as seen on the Huffington Post:

This Tuesday, March 21st, The Center and Queer Stages present Jerker, or The Helping Hand: A Pornographic Elegy with Redeeming Social Value and a Hymn to the Queer Men of San Francisco in Twenty Telephone Calls, Many of Them Dirty by playwright, Robert Chesley. I was able to chat with director, David Drake, and the show’s actors, Joe MacDougall and Linus Ignatius. Through the interview, they do a beautiful job explaining why this show is so necessary for today’s LGBT community.

Phillip M. Miner (PM): David, I wanted to start by asking why did you want to direct a this show?

David Drake (DD): I have long wanted to direct a production of, what I consider, Robert Chesley’s masterpiece, Jerker. For a 30-year old play, this is an absolutely gorgeous, shockingly relevant — and stunningly sexy — story of two men who go beyond their intimacy boundaries to find a genuine, deep romantic connection that utterly changes the shape and scope of their hearts. The play is truly a story of “sexual healing.”

PM: I want to talk about intimacy for a moment. Recently, there’s been recent conversation in the gay community about intimacy, sex and loneliness.

Linus Ignatius (LI): I think you’d be hard-pressed to find anyone in the metropolitan gay community that hasn’t struggled with some kind of sex addiction or romantic obsession.

DD: Our society’s response to my sexuality impacted the way I look at love and attachment; familial, in friendship, in romance, with how the workings of my heart have been shaped by what I grew up with believing and understanding what and how and whom I “could” love and all that I “couldn’t.”

Joe MacDougall (JM): I agree, but I also think the epidemic made our community more conservative when it comes to sex and relationships. Even with [advances in the fight against HIV/AIDS], I think there is still a stigma, and it comes from within our own community. I think this is due to a variety of issues, marriage equality, more social acceptance, and increased visibility.

LI: I think we’re working on breaking down those moral shackles around sex and moving towards freedom in the wake of the traumatic AIDS crisis. And, yet we still struggle to define what healthy sex and relationships look like. Today, when someone tests positive, the nightmare often persists that the virus renders them unlovable, or doomed to be alone. I’ve been trying to shift my thinking and to treasure my time alone, to begin to feel myself complete without the need for another.

PM: It sounds like the exploration of sex and intimacy inherent in this work are very relevant to today’s gay culture.

DD: Also, because the entire relationship [of the characters] builds and develops thru a series of 20 phone calls — many of them dirty — where they never physically “meet,” it has this utter up-to-the-moment feeling of being a real romance for our virtual times. As for my actors, Linus and Joe, in rehearsal they have already done what I knew they would do when I cast them: broken my heart (and turned me on). Honestly, I cannot wait to unleash their beautiful work on an audience.

PM: I can’t wait to see the show. The LA Times called Jerker, “One of the most important pieces of gay theater ever created”.

JM: Jerker is a beautiful play about two men who are trying to figure out how to live and love during one of the worst periods in gay history. It is a love story. It’s beautiful and funny and very moving. It was written at a point early in the epidemic when we had no idea that there would ever be a time that we could live with HIV. I liken it to WW2 movies like Casablanca where they were making these films when they had no idea if the allies would prevail.

PM: [Laughs] Joe and Linus, earlier you both began talking about HIV/AIDS-related stigma. In the current world of PrEP, Viral Load Suppression, and HIV Neutrality, in your opinion, what has been the impact on stigma against gay men living with HIV/AIDS?

LI: In a place like New York, the specter of shame is lifting — albeit gradually. But progress is still piecemeal, and while some communities celebrate the age of PrEP sluts, others are still discovering the (old) information that HIV is a treatable condition. I had no idea that people could live healthy lives with the virus until I contracted it myself and had to do a major self-education. Unsurprisingly, health class failed me.

JM: The impact really depends who you are talking to. I came out in the 80’s. AIDS was very different then. Although I was too young to have lost dozens of friends as men only a few years older than me experienced, I did experience loss. It was a terrifying time. I waited until I moved to New York in 1995 to get tested. Back then we had to wait 2 weeks to get the results. It’s very different today. I think PrEP, viral Load Suppression, and HIV Neutrality have been freeing in a way, but there stills seems to be a stigma.

DD: For me. every one of those pharmaceutical developments, in my experience, have been invaluable to curbing the sense of stigma gay men, in particular, have felt in negotiating HIV/AIDS. For decades, this virus stood as a veritable totem of shame for nearly every gay man I’ve ever known — myself included — who’s contracted HIV.

PM: The word “shame” just came up a few times. Could you talk more about that?

DD: Chesley was a a major warrior with his work to abolish that sense of sexual shame — with this play, and many of his others, too. Like me, Chesley believed that sex between two men was good, was right, was natural, was beautiful, pure. In contrast, for so many years — and perhaps for many people still to this day — HIV was like a permanent brand of sex=dirty/wrong/unnatural/sin/you-name-it-ugly. In that way, HIV was homophobia incarnate.

A positive diagnosis became proof of every lie religious bigots insisted was true. The modern advances of medicine have, to my mind, really helped shred the homophobia that wrapped this virus for all of my young adulthood. Not to mention, for sero-discordant couples in particular, restoring the possibility of a deeper sense of trust, faith, and intimacy to their romantic lives.

LI: With this play, Chesley broke the silence, bearing witness to a moment of major instability, fear, and confusion as people were dropping around him. Bad things were happening to good people. And the characters in this play maintain this philosophy of affirmation. In one beautiful monologue my character, Bert, describes a dear friend succumbing to AIDS. As he elegizes this lover of his, he renounces any shame or judgment around the gay lifestyle, and testifies to the meaningful life lived by this doomed soul.

Chelsey later died of AIDS himself, in 1990. Today, as a new generation comes of age, though the story around HIV has changed dramatically, many of our storytellers, like Chesley, have been lost, and cannot lead the way. We are haunted by their absence, and artifacts like this play help us to understand our legacy and forebears. By bringing this play to life, we honor the dead, and help bring the ghosts of the past to peace.